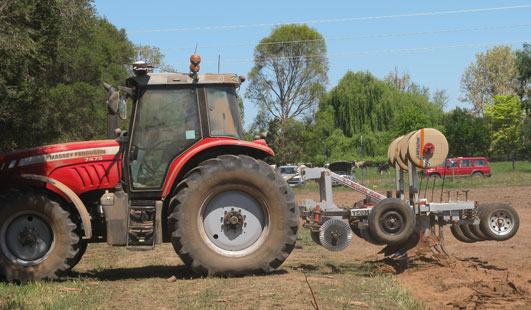 Given the decrease in water availability and increase in water price, there is a strong need for farmers to improve water use efficiency. In 2006, Southern Rural Water engaged consultants to consider the future of on-farm irrigation in the Macalister Irrigation District (MID). This study identified that subsurface drip had the potential to address constraints that acted as barriers to change to more efficient systems. Subsurface drip irrigation (SSDI) was believed to generate higher crop production, can service odd shaped paddocks, had the potential for water savings, operates at low pressure, and has low labour requirements.

The SSDI irrigation trial at the Macalister Demonstration Farm involved the design and installation of 7 ha of subsurface drip irrigation with an emitter spacing of 500mm and a tape spacing of 800mm. The system was operated and monitored for three irrigation seasons (2008/09-2010/11). Monitoring of water use, pasture production, pasture quality and soil fertility was undertaken over this period to assess the resource efficiency of the system as well as its profitability.

A number of project design features allowed significant comparisons to be made:

The following key findings were the result of the project:

On a broader stage, there appears to be little need to pursue further research or demonstration of SSDI for dairy pastures.

The Macalister Demonstration Farm, formerly the Macalister Research Farm, is a farmer-owned co-operative established on April 13th 1960. A collaboration between dairy farmers of the MID and the Department of Agriculture at Maffra resulted in the … END_OF_DOCUMENT_TOKEN_TO_BE_REPLACED