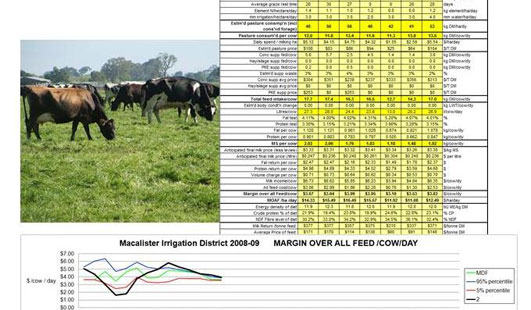 Dairy farmers are under increasing pressure to improve pasture consumption and make very careful use of purchased feed in order to maintain a profitable business.

Monitoring of the key factors that drive profit is a crucial part of any management process. If done regularly and consistently monitoring provides the opportunity for timely corrective management and then to rapidly see the response.

The MID Dairy Farm Productivity Tracker project captured all the feeding data from each of the twenty participating MID dairy farmers every ten days. Farmer participants provided data on milker numbers, milk fed to calves, supplements fed (purchased and own, quantity, quality, price, waste estimate and fodder conserved), change in body condition and stage of pregnancy, and grazing area and grazing rest time. All of this information was presented back to farmers within three days in table form as well as being presented graphically for ease of interpretation of the main drivers of feeding profitability. The graphs show trends and, over subsequent years, yearly comparisons.

Consolidated data and graphs were made available to the broader industry through the MDF Newsletter and regular media articles, providing a comprehensive picture of the physical feed and milk production of the district’s dairy farms.

All of the farms in the project (where data is complete) improved their feeding performance and profitability measured as MOAF/ha/day from 2009-10 to 2010-11. The largest jump in performance of any farm was $7,970 MOAF/ha/day while the least improvement was $712 MOAF/ha/day. The average improvement for all twenty farms was $3,110 MOAF/ha/day. The largest contributor to this improvement was the milk price but most had tuned their system in some way, mainly by increasing purchased feed or by increasing herd numbers, in response to an anticipated better return.

A project made a number of key findings:

The Macalister Demonstration Farm, formerly the Macalister Research Farm, is a farmer-owned co-operative established on April 13th 1960. A collaboration between dairy farmers of the MID and the Department of Agriculture at Maffra resulted in the … END_OF_DOCUMENT_TOKEN_TO_BE_REPLACED